I’ve just been duped. Lied to. Cheated…. You may be getting duped as well.

Yesterday, I dropped my iPhone 5 really, really, hard on a weird angle and the front split off from the back. It was toast. Totaled. Kaput.

So I pulled up my plan and called in for my insurance claim. I had been making all my payments on time and paying $10.00 a month for insurance. Well, Verizon sent me to their insurance provider Asurion. Asurion is the top cell phone insurance company out there.

Below you can see which companies use Asurion:

Imagine my shock and surprise when Asurion’s teleprompter (not a real person mind you) told me that I owed them a $199.00 deductible. I tried pressing 0 to reach a representative, got hung up on, and called back trying to reach a person with no luck.

So I called Verizon. I told them, “Hey, I paid $10.00 a month for 15 months=$150.00 for insurance. Then when I tried to claim my insurance, Asurion said I have to pay another $199.00!?! This was never disclosed to me in the contract (come to find out hundreds of others are complaining online because the cost of replacement for certain phones is not listed in the contract). Had I known that the cost of replacement was so outrageous I would’ve never opted to pay for the ‘insurance’.” The Verizon rep said, “Oh, I’m so sorry, blah blah blah…” Then something he said really got me thinking. He said, “But if you think about it, Mam, it’s just like your car insurance. You have a monthly fee and when you get into a wreck or damage your car, then you have to pay a deductible.”

…Seriously, it cost me $350 to replace an iPhone using the ‘insurance’ when I had originally paid $199.00 for it. Sure, Apple says they are ‘worth’ $700.00 without a contract but I looked at buying a new one outright, and it was only $400.00. And I’m sure Asurion is getting a heck of a better deal on iPhones than the average Joe.

Case in point. I’m a little embarrassed to admit this but my kid’s dad insured his phone for 26 months now. His payment was $6.00 a month for a $100.00 phone. We never put in a claim and after just running the numbers, I realized that we have already paid more than 110% for ‘insuring it’ than we did to buy it in the first place. If we did have to claim it (if it broke) we would end up paying another $99.00 for this model to replace it. Say his phone broke tomorrow and we made a claim, we would end up paying for his phone 3 times over!   As a business model, these companies are making bank. I gotta give them credit, this is a brilliant model. They say its insurance but the fees are so high on the claims I call it deceit.

Thanks to readers and further information I have, I have now realized that Asurion is replacing most damaged phones with REFURBISHED phones. So when you make the claim you HAVE to supply them with your damaged phone. They fix up your phone and then your old damaged -yet-fixed-up (aka Refurbished phone) gets shipped to someone who broke a similar phone.  Which illustrates the fact that this is even a WORSE deal that I originally thought.

So why do most cell phone owners choose to insure their phones? I think it because the charges seem minimal so it’s easy to justify. $10.00 isn’t that huge of a payment. But if you think about it, many of us are paying about $20.00-50.00 a month to insure our cars! So yes, $10 is a huge insurance payment for a phone, especially considering that if you do end up claiming it you still have to pay another 40% of what they claim is market value. Most likely it will end up costing you about what you originally paid for it with a contract.

I understand that people break their phones more than they crash their cars. That said, I’ve dropped my phone over a hundred times and it was only this once (when it fell from a pretty high spot to a hard floor, that it broke). I’ve had cell phones for over 15 years and this is the first one I’ve ever broke. As fragile as they may seem, if you use a really great case for it like this, and a screen protector like this, and are somewhat careful, most likely your phone is not going to break.

What I’ll do this time around is I will take that same $10.00 I was paying towards phone insurance and put it in a bank account or in a tin can.  If  I do end up breaking my phone, I’ll pull out that money I’ve saved and added it to what the deductible of the phone would have been had I gone with Asurion and buy myself a new phone for basically the same price. If I don’t end up breaking my phone, I’ll get to keep my money.

If your phones are insured, I’d recommend running the numbers and reconsidering the huge amount of insurance you are paying to Asurion and/or other companies. So unlike me and most other insured cell phone users, you don’t end up paying for your cell phone twice… or possibly even three times. 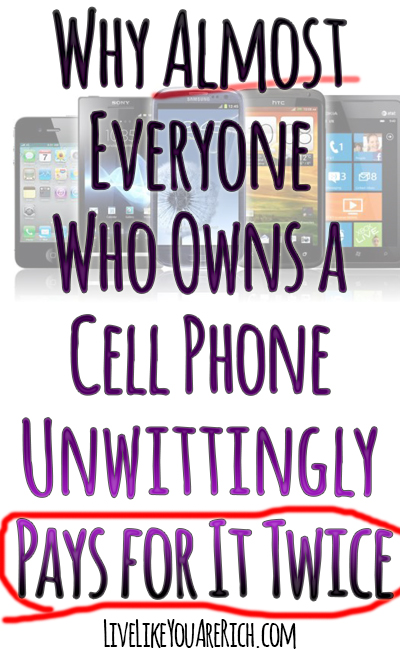 How to Save on Medical Expenses

What You Need to Know before Joining a Multi-Level Marketing Company
Previous Post: « You is Kind, You is Smart, You is Important -Free Printable
Next Post: The Pros and Cons of Refinancing »