My family and I just got home from the local ice cream shop for a family activity on a Saturday night. My boys and I chose flavors like strawberry cheesecake, rainbow sherbet, superman, and birthday cake. Not my daughter. Her choices were extremely limited. She ended up with caramel. Not because caramel is her favorite – she wanted rainbow sherbet like her brother – but because of artificial dye Red 40…the most common dye used in the United States.

She isn’t allergic to Red 40. No, the problem is Red 40 causes extreme emotional feelings in her that she can not control. For her, the emotions are usually inconsolable sadness (literally bawling), extreme outrage (sometimes violent), or feeling guilty for no reason. Unfortunately, we haven’t always known the cause for her extreme emotions. When she was younger, we were completely helpless. On many occasions she would have outbursts and yell things like “You don’t even care about me! I wish I had a different mom!” or “Why do I even live! I wish I could die!” or often we would find her lying on her bed bawling and when we would ask, “What’s wrong?” she would just keep saying “I don’t know, I don’t know.” My husband and I were completely baffled. He and I are both pretty even keel and so this was very new territory. We used to describe it as being on a roller coaster ride. We would try to console her, offer her treats to stop crying, and ultimately just look at each other in bewilderment. I’m sorry to say that sometimes we would even get impatient with her and tell her not to come out of her room until she could stop crying.

Other times she would get mad and start throwing things or destroying the house. She would kick or hit her brothers. That is not allowed in our home, and so she would often get in trouble for her outrage.

Fortunately for us, when she was about seven years old, I heard a story about a mother who was riding in the car with her daughter, and her daughter started acting out in a very uncharacteristic manner. The mother wondered what was going on with her. The words “artificial dye” came to her mind and she realized her daughter had been eating Skittles.

The story struck a chord with me and I started doing research into artificial dyes. I was alarmed at the countless heart-wrenching stories I read about the detrimental effects artificial dyes have on some children. Red 40 is a common culprit, but other dyes have harmful effects as well. This is some information I found about artificial dye:

“Over the past few years dyes have been called into question for their damaging side effects.  Recent scientific research has linked food dyes to a number of potential health problems, most notably certain types of cancer in animals and (A.D.D) attention-deficit disorder in children.  The U.S. Food and Drug Administration have acknowledged that artificial colors such as Red 40 and Yellow 5, trigger hyperactivity and behavioral problems with some children, yet they still allow it.  It doesn’t stop there, each dye, through animal testing, can be linked to different diseases.  Just to name a few:  kidney tumors, tumors of the urinary bladder, testes tumors and immune system tumors.” Side Effects Of Artificial Food Coloring

I read an article in Forbes magazine found here  that explains the history of artificial coloring. It said the FDA has been researching their safety for over a hundred years. They started with 80 different colors and have slowly banned one after another because of harmful side effects. Currently there are only 7 remaining which are still under examination. The E.U. has already determined that six out of those seven are harmful and requires warning labels to be put on foods that contain them.

Personally, I think it’s criminal that the FDA allows any artificial dye in our food without warning labels. These dyes are made from coal tar (that’s disgusting) and not something I would consider edible. But the FDA gets pressure from huge food companies to allow the dyes to stay. It’s interesting to me though that these companies make the same products for the E.U. and take artificial dyes out so they can avoid putting warning labels on them.

It’s sad really. For years my daughter has had to give up so many things…candy, Kool-Aid, granola bars, colored cereals, yogurt, fruit snacks, Doritos, Pop Tarts, and the list goes on and on. It’s not just in food either. It can be in other things like toothpaste, mouthwash, gum, etc. She tries to be so good but sometimes it’s too tempting. One time she was invited to a birthday party where they were serving cake with pink frosting. She couldn’t resist. The next morning she was acting awful. I don’t allow Red 40 in our house so I wasn’t sure what was going on. But then I remembered the party and I said “What color was the frosting on the birthday cake at your party?” She admitted that it was pink and she chose not to turn it down. It was especially hard that time because we were leaving to Grandma’s house that day. It takes a few days to get out of the system and the first few days at Grandma’s house were a little rough.

When I ask my daughter what it feels like she says “I feel really really sad or mad. I feel like it’s the end of the world. I feel like I’m always going to be mad or sad, I’m never going to calm down. Sometimes I feel like it’s other people’s fault. Sometimes I have a reason why but lots of times I don’t have any reason to be sad or mad.” She also says it’s hard to always have to turn down what other people are eating. She said “When I went to my school Valentines party, the only thing I could have was the drink and fruit. It was sad.”

It is sad. But the good news is that some companies are getting the message. We are finding more and more foods that use natural coloring instead of artificial. I really try to support those products, even if they are more expensive. Artificial dye is cheaper than natural dye so some products cost a little more, but usually the difference is not significant. Candy and sugar drinks are still major problem areas. I signed a petition last year asking the Mars company to take artificial coloring out of M&M’s. Supposedly so many people signed the petition that they agreed to take it out. But they haven’t done it yet. And since that time I have not purchased M&M’s. One way to make a difference is to let your money do the talking. Just stop buying their products. Maybe then these companies would stop ignoring the harm they are causing so many children.

Last summer we were at a family reunion and my husband noticed another family was having a very hard time with their daughter. She kept crying and wouldn’t come out of the tent. The father was at his wits end so my husband inquired and told the mother to talk to me about Red 40. She did and was extremely interested in our experience with our daughter. I asked if their daughter had had any red candy recently. She had been eating quite a bit of red licorice. I felt so bad for all of them. I told them it wouldn’t be easy but they could try taking Red 40 and other artificial colors out of her diet. They were willing to try anything. I explained that you have to be very diligent because – as my daughter says – it is in everything! They were surprised once they started looking at labels how true that is. However, the happy ending is that we saw them a month ago and they came to us and reported that their daughter is doing much better and thanked us for the help. I wish I could tell every parent out there who may have kids with sensitivities to dye the same thing. There is nothing worse than being unable to help when your child needs help.

As for my daughter, she is now old enough to do her own monitoring and she does a great job! She thinks about it even when I don’t. When she gets candy at school she often gives it away or brings it home to trade for another treat or money. I am always willing to buy my kids’ candy from them because dental bills are a lot more expensive then the few dollars I spend buying their candy.

I hope someday my daughter will be able to get whatever ice cream flavor she wants. I hope she will be able to enjoy all the foods at birthday parties and school celebrations. But her healthy state of mind is much more important than those things. Right now, all I can do is try to spread awareness and be grateful to have the knowledge we have that has helped our daughter live a much calmer, happier life.

Karen Jensen is the stay-at-home mom of three and Co-author of our book, Living a Rich Life as a Stay-at-Home Mom: How to Build a Secure Financial Foundation for You and Your Children. 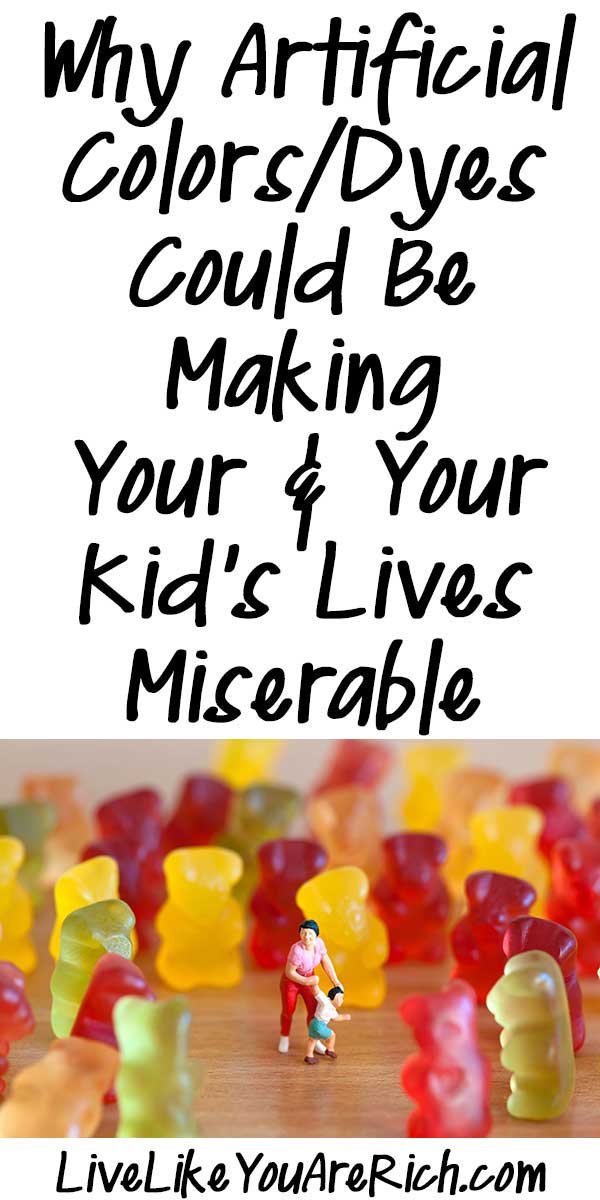 How You Can Enrich the Lives of Refugee Children in Greece

How to Teach a Toddler Their Colors (37 Creative Activities!)

8 Ways to Save Money, Lower Calories and Provide a Tastier Lunch for Your Kids
Previous Post: « Why You Should Have an Estate Plan for Those You May Leave Behind
Next Post: 3 Easy Ways to Avoid Solicitors and Impulse Purchases »