My daughter is just an angel. She has been so calm and sweet and just an absolute joy to have around. The only thing that she’s really put up a stink about is drinking from a bottle.

My first was so hungry all of the time that he took to the bottle very well. The only problem was he no longer wanted to breastfeed afterward. I had an inconsistent let down and lower supply so after drinking from a bottle just once, he refused to breastfeed after (full story here). As a result, I had to pump for months. It was miserable.

So with my daughter I decided to stay away from the bottles and not give her the option to develop nipple confusion or be picky like my son was. The problem with this is that at four and a half months postpartum I was on my last straw with nursing (breastfeeding is ridiculously hard for me), and I needed her to start taking a bottle. I tried many things. Many of which did not work.

Finally, after having success I realized what did work and wanted to share it with you.

These are the steps I took.

1- I found a formula that tasted most like breastmilk: Similac Supplementation. I bought the little pre-mixed bottles of formula from many different brands and gave them a tiny taste test. Most were chalky flavored, others I couldn’t pin point what the taste was (but it was not good). When I tried Similac Supplementation I realized it would be great for supplementing and for making the switch because it has a slightly sweet flavor—similar to breastmilk.

2- I bought multiple different brands of bottles. I watched YouTube videos on reviews. I read thousands of reviews online. I went to BuyBuy Baby and bought all the ‘breastfeeding baby bottles’ and the price was insane. I paid like $70.00 for a bunch of different bottles. The worst part was that she wasn’t taking to any of them (your baby may be different though). Then I asked on Facebook and a friend suggested the Playtex drop ins bottles because they are less expensive and have four different nipple shapes to try. These were the best. She took to the full sized nipple and I only had to spend a few more dollars buying the pack of 4 nipples (not four different bottles) to figure it out.

3- I started with 100% expressed breastmilk.

4-Then I waited until she was getting hungry. I made sure the milk was warm (the same temperature as breastmilk). Then right before she was about to start screaming in hunger,

5-  I put on a thick hoodie (so she couldn’t smell the breastmilk on me), held her in a similar manner that I do when I breastfeed her and gave her the bottle…

She took it. She drank from a bottle-it was a miracle and I was ecstatic!

Over the course of the following few days I slowly added a little supplementation to the breastmilk. I gave her a 75 breastmilk/ 25 formula mixture. Then went to 50/50 and 75/25 until she was drinking 100% formula. After weeks of trying, once I got her to take the bottle, it only took about 6 days for her to go from absolutely refusing to take a bottle to drinking 100% formula from one (except at night). And after a few feedings it was no longer required for me to wear a thick hoodie, she drank from the bottle just fine.

At night I still nursed her out of compassion for her. It was a big change for her to go from exclusively breastfeeding to exclusively bottle feeding so quickly and I noticed at night she was more reluctant to take the bottle. So I nursed her. It was a happy compromise that helped her and me adjust. After a couple weeks I weaned her entirely.

Getting her to take a bottle was such a blessing! It couldn’t have occurred at a better time either. That week I had to go to the ER for mastitis. Since she was taking a bottle it was easier for me and those who had to watch her while I was away.

I wish you all the best in this endeavor. I know how tough it can be to get a baby who refuses to drink from a bottle to do so. But I’m here to say, ‘miracles do happen!’ And by following many of the tips above it can happen to you and your baby too!

The Boob by Joovy 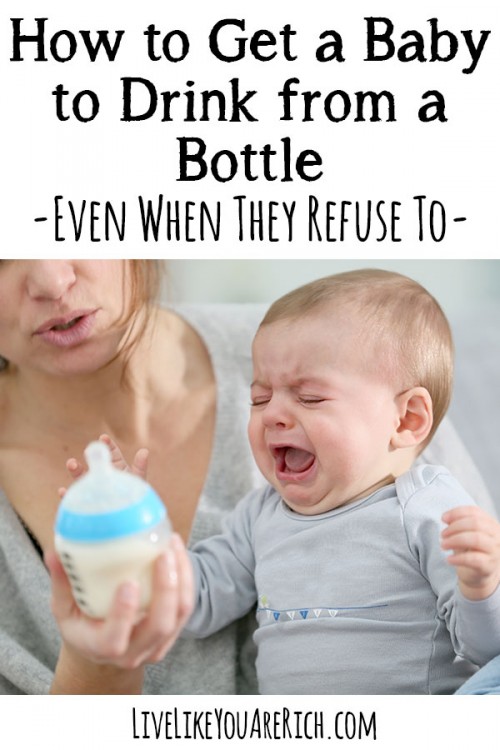 What To Do When You Can’t Breastfeed

How to Break Through the Smog of Daily Routines and Drink In Life’s Beauty
Previous Post: « Date Stamp Teacher Gift
Next Post: 7 Easy, Free, Legitimate and Convenient Ways to Earn Gift Cards Online »