Every Christmas Eve since I can remember my extended family has celebrated together. We would eat a wonderful meal, chat for a bit, and then the kids would be excused to go prepare for the Nativity play. Acting out the Nativity play for the adults was and continues to be the highlight of Christmas for my family and me.

Thus, I wanted to share our script, costume list, and songs with you in case you or your family are wanting to celebrate Christmas by acting out the nativity as well.

To get ready we took the time one year to gather and buy most of the costumes. Some we have also added as time has gone on. So for years (over 30 years) we have had a special nativity costume box that we pull out each Christmas Eve which includes the costumes, scripts, music books, and manger.

Having everything ready and in one place makes the preparation stress-free. We just take the nativity play box to whichever home we are meeting at, divvy the costumes out among participants (if need be, create a few make-shift costumes), pass out the scripts and song books, and begin!

Photos used: The photos you see are from multiple different years. Some actors are married and some are cousins, some are grandchildren others great-grandchildren, and we even have a few friends that participate if they are with us on Christmas Eve as well. 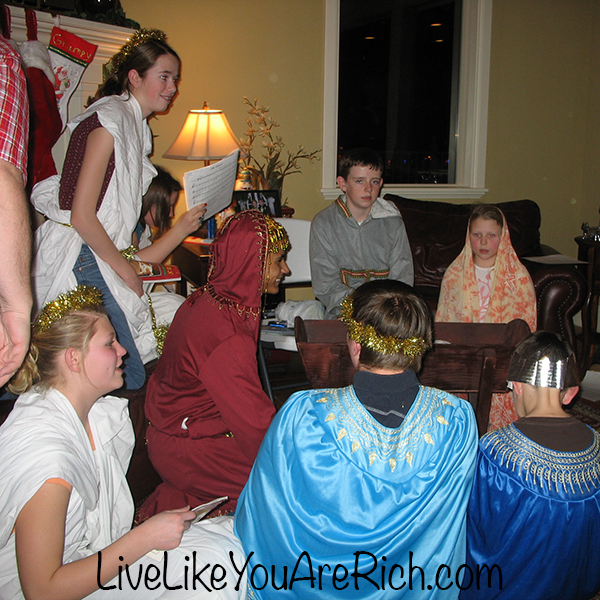 After the participants were ready, the adults would come downstairs, get seated, and then the narrator would read the script as the kids acted it out. One or two older teens or adults would cue the younger kids on when to go out into the living room and where to go. There are one or two lines that can either be read by the narrators or the actors (its entirely the actors choice). 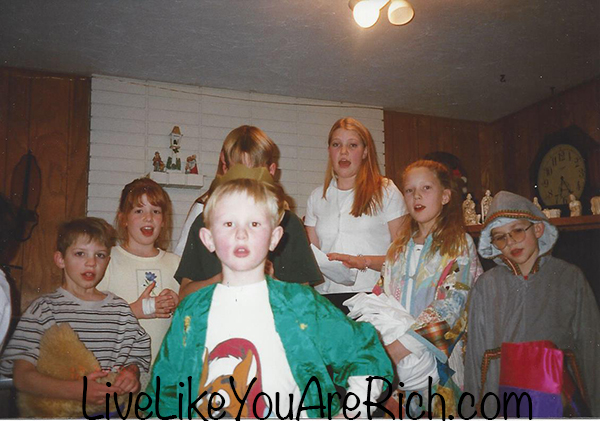 The script is intertwined with carols that we would all sing as Mary and Joseph walked to Bethlehem, the sheperds and sheep made their way to the stable, or as the three wisemen entered and walked around as well.

If you use this script (downloadable) but worry about not wanting to play an instrument (we either had the piano or guitar player play the carols from this piano/guitar book), then I would recommend just singing along with this instrumental CD that contains all the songs here the 1st verses with the lyrics for songs are downloadable here.

As mentioned earlier, the songs are cues for when the kids should enter and what they should be doing. The music adds an amazing aspect to the play. Imagine watching a movie with no music. It makes a huge difference, so I really recommend not skipping it! We use this carol book here. 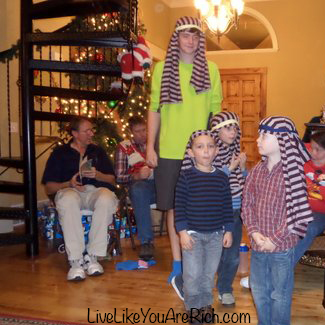 The script is simple, easy to follow, and fun for people of all ages. We have been using it over 30 years and it never gets old. Putting on the nativity play continues to be the highlight of the Christmas holiday for our family. It is such a wonderful tradition and helps me remember the reason for the season and makes celebrating the birth of Christ much more memorable. 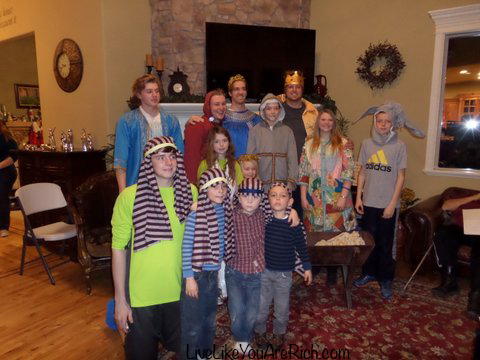 What You Need to Put on a Nativity Play

Piano and/or guitar and Piano/guitar music (or CD see below)– You can find the piano/guitar book we use here (we copy the carols and pass them out and collect them so we have only ever needed to copy them once and have only used them for personal use).

Or if a piano/guitar is not going to be used you can just sing along with this instrumental CD that contains all the songs here. Or sing acapella.

Lyrics for Songs- The 1st verses with the lyrics for songs are downloadable here.

People-You’ll need at least 5 people, yet the more the merrier.

NOTE- When I was younger, usually before we met up out at Grandma and Grandpa’s house, a teenager would be in charge of divvying out the assignments/parts of the nativity. He/she would call around and ask everyone what they wanted to be. We would get our assignments and then if we had a speaking part (a few of us had lines) we would practice a little bit.

Now that we have been doing it so long and us kids have kids of our own in the play, we are so accustomed to it that we no longer assign parts or lines beforehand.

Mary- A robe of some kind with a pillow around her belly (if desired) and a hood or towel, fabric, etc. draped over her head or Mary costume.

Joseph- A robe of some kind with a hood, towel, bandana, or scarf on his head Joseph costume. 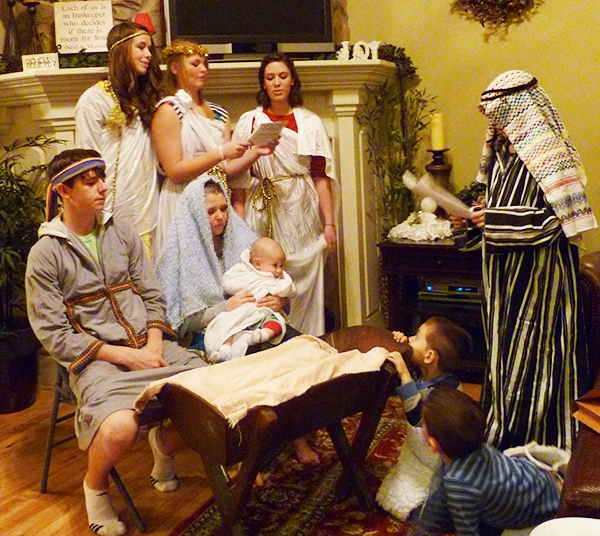 Baby Jesus- A doll or baby in a white towel, muslin, or blanket.

Optional: a manager (ours was handmade by a family member). 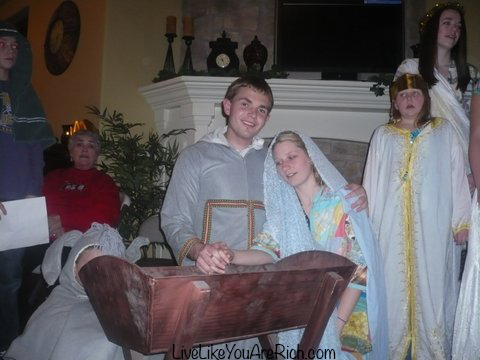 (Mary and Joseph are an actual married couple in this photo.)

Optional: Cow and other animals at the stable. 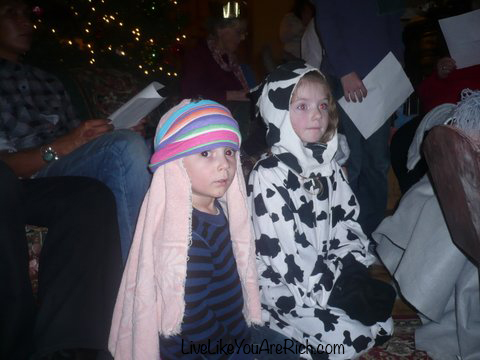 Shepherds- robes, towels or fabric draped over their heads secured with a belt, fabric or bandana, walking sticks or canes or shepherd costume.

Sheep- sheepskin rug with belt around kids or a faux fur blanket or sherpa on the backs of the kid(s), sheep ears, and/or a sheep costume. 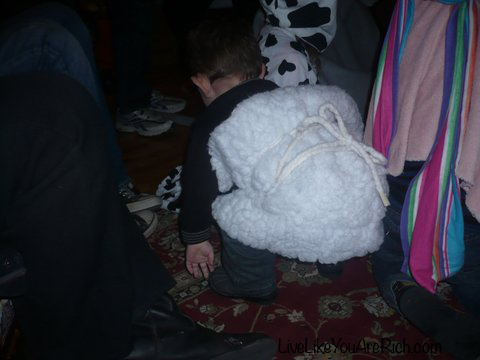 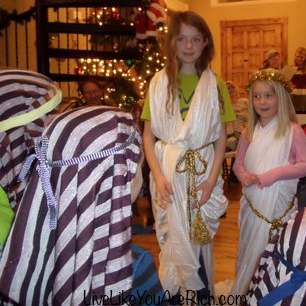 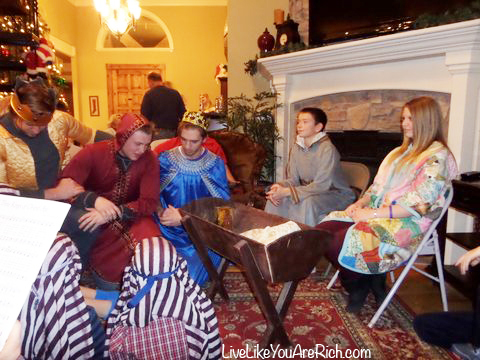 Optional: Camels- brown shirts or sweats with a pillow on the back. Or camel costume. 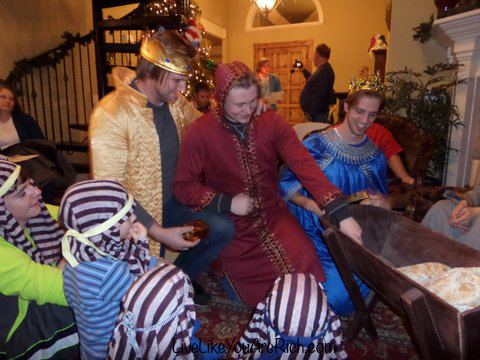 I hope that using our script, music, and ideas for costumes it will help your family put on the Christmas Nativity play at home and enjoy it as much as we do! 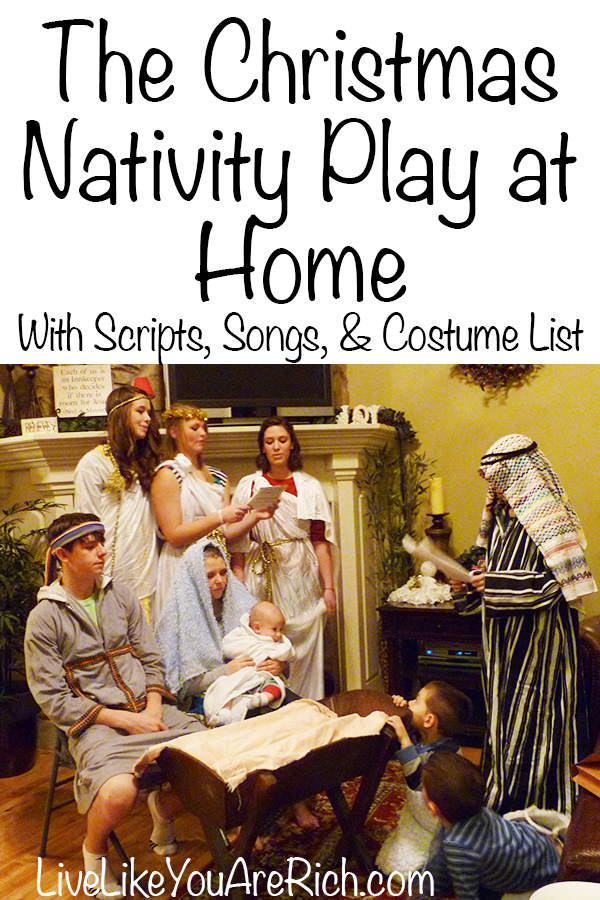 Samwise Gamgee Costume for a Toddler

How to Make a Nacho Libre Costume

I made this custom footprint doormat for some frie