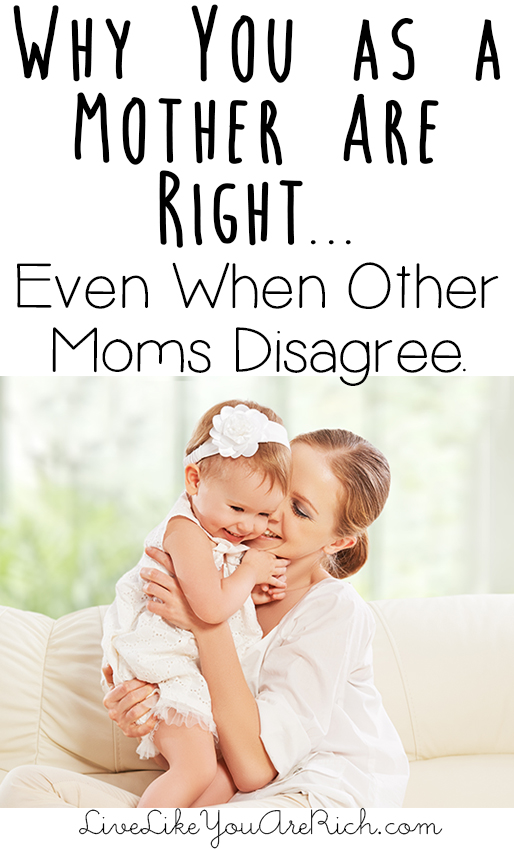 Birthing: Natural vs. Epidural vs. C Sections vs. Induction

Baby Sleeping: Co-sleeping vs. Crib with or without bumper pads vs. The Swing

Immunization: Immunizations vs. No Immunizing vs. Delayed or Selective immunizing

Chances are you have opinions on many of the aforementioned topics.

Chances are someone you know has a different opinion about the same issue.

Chances are you think you are the one who is right.

I know I usually do.

And that’s not necessarily a problem.

I personally think it is fine to supplement or formula feed because I have medical problems with breastfeeding but it may not be the best thing for other moms and babies.

Just because I wouldn’t want a home water birth doesn’t mean it isn’t right for others.  I love to swim and be in water, so I can see how it would be calming and relaxing.

I liked to put my son down on occasion. I had him swing in his swing, bounce in his bouncy chair, or lay on a mat for some tummy time. That doesn’t mean I was wrong to not baby wear him. But my second baby has to be worn all the time. Each baby is different, and what was right for one might not be right for another.

And just because some moms do the cry-it-out method with their children earlier than I would doesn’t mean it didn’t work for them and their kids.

I think we judge each other because we want to think we are doing it right or that we did it the right way.

I’ll be the first to say there is actually a moral right and a wrong. However, I have noticed we are not often judging others based on a moral standard, but rather, based on preferences. A lot of these highly controversial issues are just that: Preferences.

My friend once told me that her dad said, “It’s good to be somewhat open minded. Just don’t be SO open minded that your brains fall out.”

I love that saying. And I came up with another similar saying: “It’s good to be somewhat closed minded. Just don’t be SO closed minded that your brain doesn’t have room to think.”

So yes, sometimes there is a right and a wrong. We should not be so open minded that we support or ignore explicitly wrong ways of parenting. Two examples of this are doing drugs while pregnant and, of course, abortion. The choice to kill an unborn child is wrong regardless of personal preference.

Additionally, we shouldn’t be so open minded that we turn a blind eye to child abuse, child abandonment, or chronic neglect of children. Those circumstances I can understand voicing objections to, and I’ll even join in.

But most of the time I hear mothers judging, gossiping, or scrutinizing other great mothers based on the way she prefers to give birth or raise her kids.

The other day I read a blog post (on a different blog) listing multiple things that our mothers did WRONG when raising us.

So apparently people are now judging our OWN mothers for how they raised us?

In the comment section there was an older woman who said something to the effect of, “We were doing what modern day medicine and society were telling us to do. How would you feel if in 25 years everything you were taught as the ‘right and safe way’  to raise your kids was actually termed dangerous, stupid, and wrong and you were blamed for it?”

She has a great point. What if we were all told 25 years down the road that swaddling a baby was bad, that tummy time caused premature spinal issues, and that laying the baby on its back caused brain problems?

“Well, that won’t happen,” you say. Medical studies have PROVEN those things are safe.

They were told years later they were WRONG in how they raised their children. “How could they be so stupid?” people may ask. They should’ve known that laying their babies on their stomachs to sleep was a huge no-no. That bumper pads (that were supposed to protect their babies) are now considered a death trap for newborns, and that formula wasn’t as healthy as breast milk.

The point is medical advancements, discoveries, and opinions are always changing. What is right now may very well be WRONG in the future. But 90% of these discoveries and suggestions on how to give birth or raise your baby aren’t exactly a question of morality, rather they are following the advice, trends, and experts of the day.

I do believe in the progression of scientific research and studies. That said, you can find scientific support, proof, and justification both for AND against many of the ‘hot topics’ on birthing and parenting. So I’m just saying that many more times than not the child will survive and be healthy and happy being raised the way the mother feels is best.

Some kids are allergic to peanuts, others have lactose intolerance, others can eat whatever they like. Some are gluten intolerant, and others fructose intolerant. Maybe some unfortunate children have many of these issues and have only a handful of items they can safely eat. When we look at what a mother is feeding her child, why do many jump to conclusion that she is feeding them the ‘WRONG’ types of foods?

Lets open our mind up a little and think: maybe she is a good mother and she knows what is best.

After all, who do you think loves that child more? The woman who is judging? Or the mother?

Let’s open our minds a little when a woman we overhear mentions to her friends that she has to be induced. Maybe she has gestational diabetes; maybe her pregnancies are high-risk; maybe she has had other children and they had to be induced to get into the world as well. Or perhaps she has to travel long distances to get to her hospital. Maybe she just doesn’t want to have her child on Christmas Day. Any of these may be perfectly reasonable and right for her… if it isn’t right for you, don’t do it.

Let’s have some compassion on the woman who is feeding her child formula because heck its about $200-$300 more a month than the breast milk… and maybe, just maybe, she has physical limitations and can’t breastfeed.

Why not think twice before voicing disgust that a friend/recent mother of a 3-month-old still won’t take her baby out in public to meet you for lunch… because we all know the baby is old enough to come outside already! Have we taken the time to think, ask, or listen to see if the baby has a condition that the mom hasn’t told us about? Do we know if the mother is suffering from Post Partum Depression and perhaps can’t function fully? Do we know if there are other reasons why the baby and mom can’t venture out to meet us for an overpriced salad?

How about we stop judging the mother who uses a stroller rather than a carrier or wrap. Maybe she has a herniated disc, maybe she doesn’t have the money or means to buy a comfortable baby carrier, or maybe she prefers to push her child rather than carry her baby on her.

What about children and TV, the brand of car seat used, immunization preferences, and/or if the mother is perhaps less of a ‘helicopter parent’ than we think she should be?

Can’t we put some of these opinions aside and celebrate motherhood together?

We are all different. We are all unique. But we (the majority of all mothers) have one thing in common…

… the love we have for our children.

Why don’t we open our minds a little and give them room to think through some vast and different possibilities and scenarios before boxing a mother into a category: irresponsible, too trendy, too granola, old-school, helicopter parent, etc.

Mothers have been doing this job for centuries and it’s tough. It’s tough enough that we don’t need scrutiny, judging, or hatred from each other.

With so many abortions going on today, why can’t we celebrate any mother brave enough and selfless enough to give birth, love, and rear a precious child?

And it IS okay to think you are right about the way you choose to mother. It’s also okay to seek out information and advice on how to become a better mother.

Personally, I am usually looking for ways, advice, and help on how to become a better mom. No one is perfect, so I understand that in some areas I do need to get better or ask for help or advice. But sometimes the advice I receive just doesn’t work for my child and me. Other times, it’s exactly right for us. Not everything is a good fit for every mom and child.

It’s okay to change how you mother if you discover that something mainstream, hip, or trendy is actually a great way for you to be a mom. It’s also okay to reject a lot of the ‘motherhood trends’ or even personal advice that you are presented with. Do what works for you and your children and let the negative comments roll off you like water on a duck’s back…

Because the vast majority of us are excellent at mothering.

Unfortunately, the place that many of us fall short in motherhood is when we believe our way is the only ‘right’ way to parent and vocally force it on to others. We fall short when we fail to support, rejoice, and appreciate other women who are selflessly sacrificing their time, money, and talents to bring beautiful souls into the world and mother them in love the best they can.

So I encourage you to follow your mind and heart in motherhood. Do what you think is right. But please in return, don’t doubt and judge other moms for doing the same.

Championing Motherhood Community
Previous Post: « How to Paint and Stencil an Entire Room
Next Post: How to Make Money Blogging »