Being on a family medical plan for the last five years and having two children, two surgeries, and doctor visits, there really is no other bill I dread more than a medical bill.

The reason for my dread is because first, they are often quite costly and second, more often than not they are wrong and require that I call a few different people to resolve the issues. Even with medical insurance, we’ve paid out more than I want to think about premiums, copays, bills, etc.

That said, without medical care, I could almost say I wouldn’t be alive today. So although I’m grateful for the amazing advancements and availability of medical care, there are things that I have done to save tens of thousands of dollars over the past couple of years alone.

Here are 13 Proven Ways to save tens of thousands on medical bills:

1- Always ask for a discount.
a. When pregnant, I asked the hospital if they did any discounts. They said if I paid for our baby in full before leaving the hospital, we would receive a 25% discount. Just asking and paying before we left (which was only a few weeks before we had to), we saved about $275.00.
b. A bill at the dentists was less expensive for paying at once (10% off).
c. An emergency room bill was cut down 20% by just asking.
…and the list could go on! Make sure to always ask if they offer discounts for paying in full with a credit and or for paying in cash.

2- Make sure your bills are being processed correctly.
a. A medical bill that came to me was processed wrong (under maternity instead of regularly) with the insurance. I sent in a dispute because it was not a maternity related surgery and had it reprocessed which saved me over five thousand dollars.

3- If there are any changes in care, or if you have extenuating circumstances double and triple check, then follow up if need be.
a. My OB went off my insurance during the middle of my pregnancy. She said that her new program would pay for her to continue with my care until the baby was born. I called and confirmed this with a few other people and got it in writing (important). After my baby was born, I received bills from her new company. I called and reminded them of this arrangement. They promptly deleted over $400 worth of bills… but I had to call/follow up in order to make that happen.

4- Do your due diligence before seeing a new doctor or hospital to make sure it is in-network with your insurance.
a. Despite confirming with an ultrasound office that they were in-network I was billed $1,200 because my insurance said they were out-of-network. I sent in a dispute, called the hospital, and called my doctor who referred me. The dispute from the insurer came back denied because according to my insurance, the doctor’s office that referred me and the other office that confirmed they were in-network were at fault. I’m in the process of working with the medial offices now, come to find out this happened to six other women. So far they have reduced our bills 49% and are working on reducing them more. Make sure you in-network by confirming with all parties.

5- Call to get to the bottom of rejected claims.
a. My newborn daughter was not listed on my insurance and came back denied. After an hour on the phone with the insurance company, we found that she was on her dad’s policy (we have to have two separate policies). The hospital was able to bill his policy and it saved us a couple of thousand dollars.

6- Ask if paying for the appointment or prescription out-of-pocket is cheaper than using insurance.
a. Download the SearchRX app. It will show you based on the area the cheapest place to fill a prescription and also if there are any available coupons.
b. Getting the pharmacies generic prescriptions were sometimes cheaper than my copays.
c. My sister went to a specialist and it was cheaper to pay for the appointment then pay the specialist deductible.
d. For prescriptions, Costco and Sam’s Club have 300-400 generic prescriptions that you may be able to get for less. Ship to home companies may be cost effective as well.
-If you pay out-of-pocket, please remember that these payments will not go towards your deductible-. e. Read 14 ways to save big on Prescriptions here.

7- Don’t allow your policy to lapse, but if it does get it corrected quickly so you don’t miss out on coverage.
a. My credit card was used fraudulently and canceled and replaced twice in just a month. During this process my dental insurance lapsed and they canceled it without notifying me. Just by calling and asking to be reinstated I was able to back pay a few months. Doing this resulted in me not having to go through their one year benefit waiting period again. Getting it reinstated without lapse saved me at least a thousand dollars as I had a few major things worked on that year.

8- Always take responsibility for your own care, read over your benefits, and check multiple sources for major procedures.
a. Being on the marketplace has taken the insuree’s responsibility up a notch. I now call my insurance and the doctor and triple check rates, responsibility, coverage, etc. before setting up appointments. Before I began doing this there were just too many misunderstandings that have cost me a lot.

9- Check around to see if certain procedures will cost less elsewhere or negotiate a lower rate with a local doctor by price matching.
a. I have also driven hours for one surgery because they were significantly cheaper elsewhere.
b. Further, I had our first baby out of state (story here) which saved thousands.
c. My aunt, who is working on a post for my blog on how she cured lung cancer, moved to Hungary to receive the care she needed for a few months because it was drastically less expensive there than it would’ve been here or even in Mexico!

11- If you can, separate policies according to ways that will save you money.
a. If you can, have the person who knows they need a surgery, or will be pregnant, or has historically bad health be on their own low-deductible-policy. Then place the rest of the family on a different policy with a higher deductible. This is what my family does in the marketplace. I’m not sure if it is a possibility for everyone (we have no choice as her dad is Native American and I’m not), but if this would be applicable to your family and they allow it, it will save considerably.

12- Research all of your options
a. I have a post here that talks about the must-read secrets and tips about Obamacare.
b. If you are Christian an alternative to Obamacare may be Christian healthcare groups such as: Liberty HealthShare, ChMinistries.org, Medi-Share and Samaritan. The first two accept those who do not believe in the trinity, Samaritan and Medi-Share does not.
c. For those who can’t afford either, sometimes paying the penalty and getting a disaster plan for your family will save you the most.
d. Some may qualify for veteran, native, and other benefits. Others may qualify for medicare. Do your research and make the necessary calls.

13- Claim your medical expenses
a. If you incur significant medical expenses and you are eligible to itemize deductions, you can deduct a portion of them from your income tax. Tally up all paid premiums, bills, pharmacy charges, etc. and give it to your accountant or input the number into a tax program like Turbo Tax to get a deduction if applicable.

Whatever you do, remember that it is very important to have health insurance of some kind. I’ve read stories, heard stories, and seen friends and family become financially devastated due to lack of health/medical insurance. One accident caused them to lose almost everything. Others had their credit wiped out. There are too many of these types of stories because people have neglected to have some type of medical insurance. Protect your family!

I relate these personal experiences to show you that in the last few years alone I have saved tens of thousands on medical bills just by making a few phone calls, reading over the bills in detail, sending in legitimate disputes when the billing company has made a mistake, doing research, and paying in the way and at the time that offers me the biggest discount.

This is a cost-effective healthcare option that everyone should look in to. It covers everything over $500 at 100% (Gold plan). It’s better than a disaster plan, cheaper than almost all other regular insurance, and even has full maternity coverage: http://www.chministries.org/default.aspx?mem=249233

In order to save tens of thousands on medical costs, I highly recommend you to be proactive in wisely choosing health insurance plans and monitoring, resolving, and paying your dreaded medical bills. 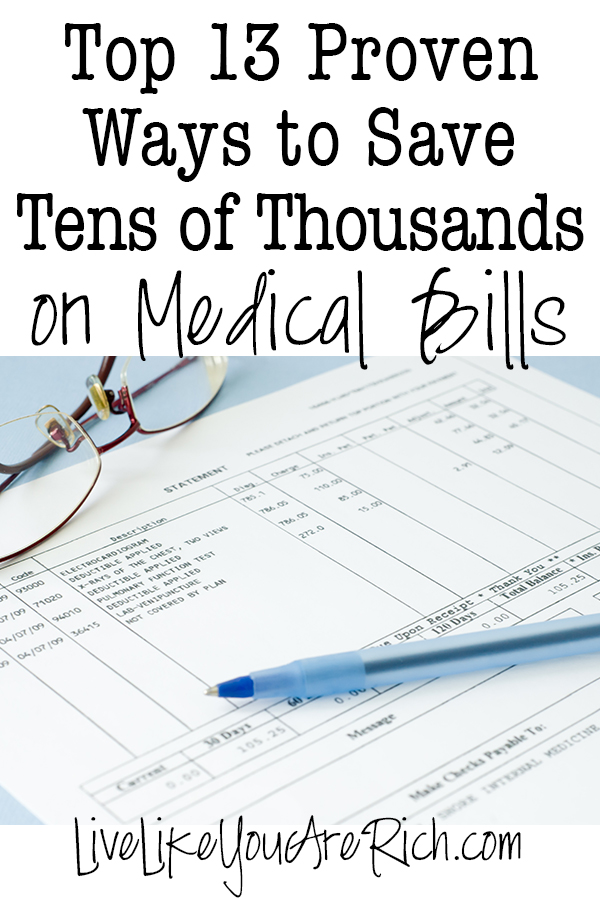 How to Save Money on Pregnancy-Related Medical Bills

🥗🫐🧀✨Eating healthy is easy with this he

🎄Get your Elf on the Shelf ready for Christmas