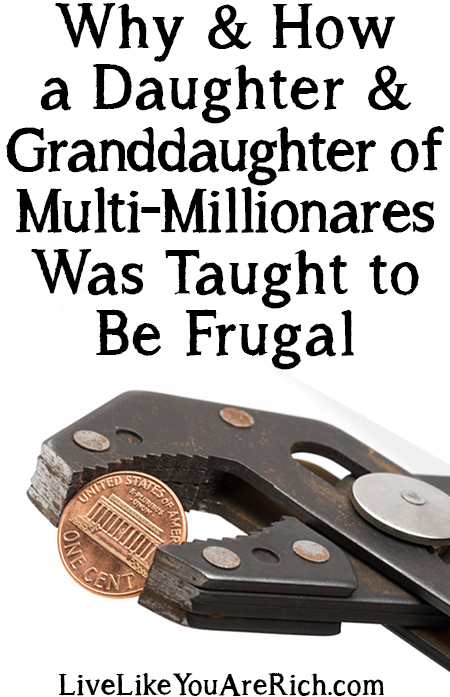 In psychology they have found and continue to prove that at the roots of our thought and actions are beliefs that we formed quite strongly while we were young. Psychologists call this your family origins. And while I’d like to think that it is not really the case (I like to be individual and independent) I continue coming back to the realization that a lot of who I am today, including my relationship with money, stems from my family and what I have observed and been taught growing up.

While this is a proven truth (that our actions are the product of a compilation of truths and beliefs we formed when we were children) it does not mean we cannot change. Although most frugal-minded people learned these ways from their parents and family members, others have learned it by seeking out and implementing thriftiness.

Unfortunately, my mother was raised by a single mom who struggled just to put food on the table. Despite her poor circumstances my maternal grandma was not very frugal. She really didn’t set the best example for my mother to follow. Because of this my mother sought out information and ways to become frugal from other sources. She is very good at managing money and thriftiness which she taught to us children.

My paternal grandma (although a multi-millionaire) would take me out garage selling. We would find lots of really nice things and pay pennies on the dollar for them. I remember how she bought tons and tons of huge baskets at the thrift stores and would save them up over a few months leading up to December. Then around Christmas time we would fill them with oranges, treats, goodies and all sorts of things for the neighbors as gifts. They looked to me like professional $150.00 Christmas baskets you would buy at an expensive boutique. But she probably spent about $5.00-7.00 on each one. I remember taking them around to her neighbors and seeing the shock and smile on their faces as I handed them an enormous basket of Christmas goodness.

She would also carry coupons with her. Whenever we went out to eat she would check to see if she had a coupon. When I went to visit her she would send me home with coupons. I was fairly young and didn’t really understand what they were but as I got older I started realizing that she was saving lots money with paper!

Then there was my mom who didn’t love to shop. When she did, she would sometimes use coupons, but mostly she just chose to shop at the least expensive grocery store in town (and still does, even though she and my dad are also multi-millionaires). She always made us work for our money. She also gave us a budget to stay within each year for our school clothes. When I begged and pleaded for a pair of $80.00 jeans (that were the IN THING in Jr. High) she told me I could get them, I just needed to figure out how to get my other school clothes super cheap to stay within my $150.00 yearly school clothes budget, which somehow I did. Anything else I wanted in the year related to clothes or fashion I had to work for and earn.

My dad has always taught us about money. Ever since I knew what money was he was talking about using money to grow money. He has been a very successful investor. Many people in the neighborhood would’ve never guessed he was so wealthy because he never showed it. He built his house himself at around age 25 and has lived in the same house ever since – about 35 years now. He always drove around in old cars. When one was getting really old he’d give it to us kids to drive until it did die. Instead of going out and buying something nice for himself he’d buy another used, yet reliable car. When I was in high school he gave me a 1980 Honda Prelude that he and my older siblings had driven almost to death. It squeaked and reeled really loudly and wouldn’t always start. I had to park on a slope or incline and jump start it to get it to go. It seriously was not the average nicer-car-than-the-teachers-have like most kids drove at my high schools. Finally it died a year later on my way home from school. No amount of popping the clutch would work. So I called home, got picked up and we donated it to a scrap yard.

I got the next hand-me-down car which was a Toyota Camry that was 11 years old that my dad had been driving. Even though it was old I was grateful for something I didn’t have to ask my friends to push so it would start. I was also VERY grateful that it didn’t draw a ton of attention in the high school parking lot when I started it up because the prelude would make this really loud high pitched squeal when it did start. Plus, the AC and the radio worked! So I felt like I had hit the jack pot. When you start off with a really big piece of junk any upgrade is appreciated.

A wealthy dentist my sister knows drives a really old minivan and lives in a modest house. During the recession which hit her state hard a lot of professionals lost their practices. He didn’t because of his frugality and money management tactics.

As you can see from those examples, frugal living isn’t just for those of a lower income, it is for the rich as well. In fact, in our family we often say that frugality is what makes wealthy people. What I’ve come to learn is that thriftiness is practiced by people with a certain frame of mind. And as mentioned before, it can be learned no matter what your income.

Frugality is making do with what you have, finding a way to fix what breaks, saving and paying cash for items you need, and getting them for the best deal possible. It is also about anticipating emergencies (by creating an emergency/savings fund) and paying for and always having car, health, life, and home insurance. Further, thriftiness is planning ahead.

In order to start being frugal (or become better at it) you will need to learn how to become frugal. Then believe you are that type of person. Believing then produces actions which will get you results.

Whether you came from a less than wealthy background or are the child of a billionaire, no matter your family origins, you can learn to become frugal and financially secure.

How to Get 30-50% off Thrift-Store-Priced Clothing

Get crafty with these cute and easy DIY valentine'

This Valentine’s day mantel decor is styled in a

My daughter turned seven and I put on this quick l

This banana pancake recipe can be prepped in just

"My two year old recently got into the Desitin dia