Elf on the Shelf: The Polar Express.

Today our Elf on the Shelf sibling duo took a ride on The Polar Express.

They had their golden tickets that said, “BELIEVE”, 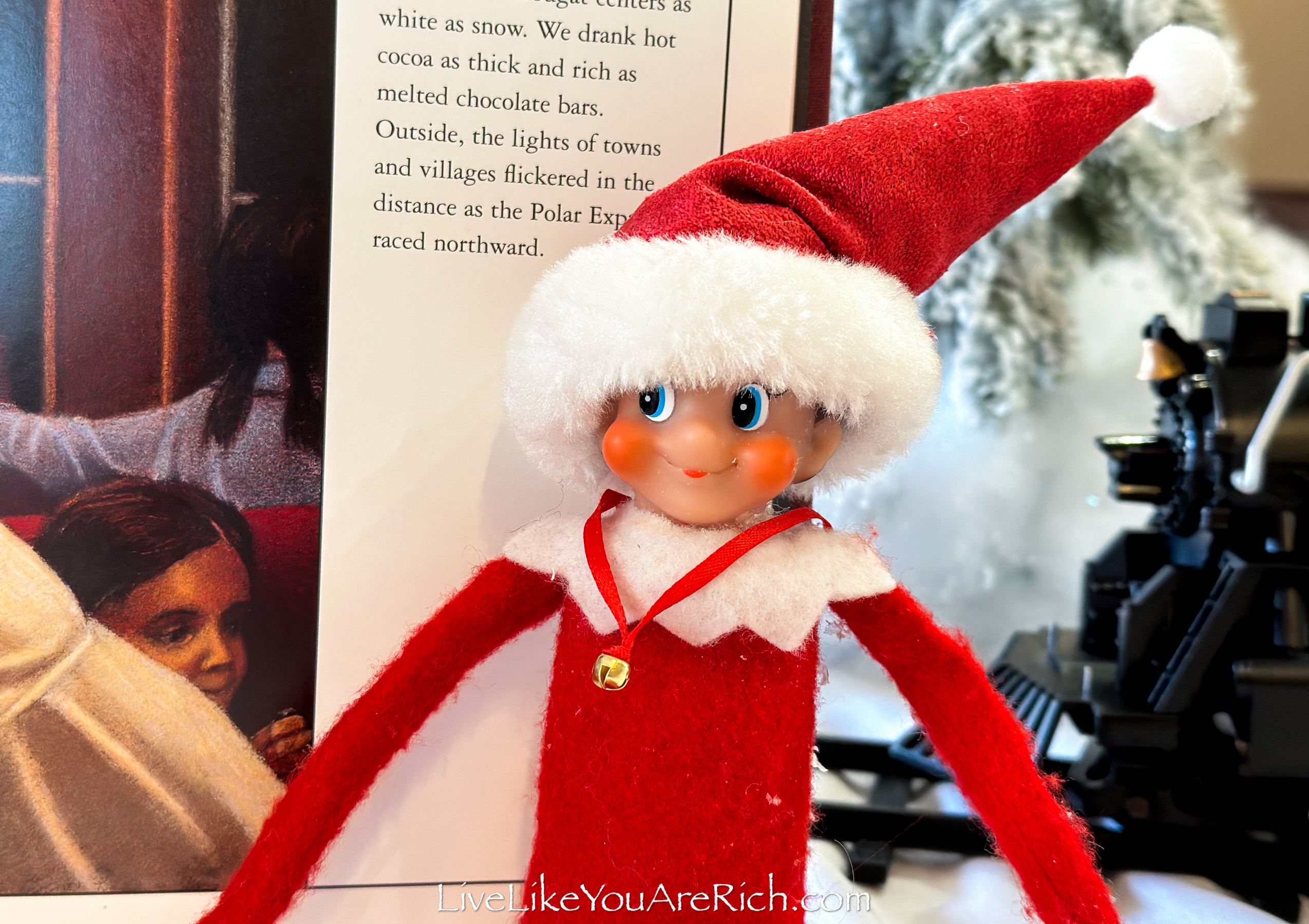 and their hot cocoa—as thick and rich as melted chocolate bars. 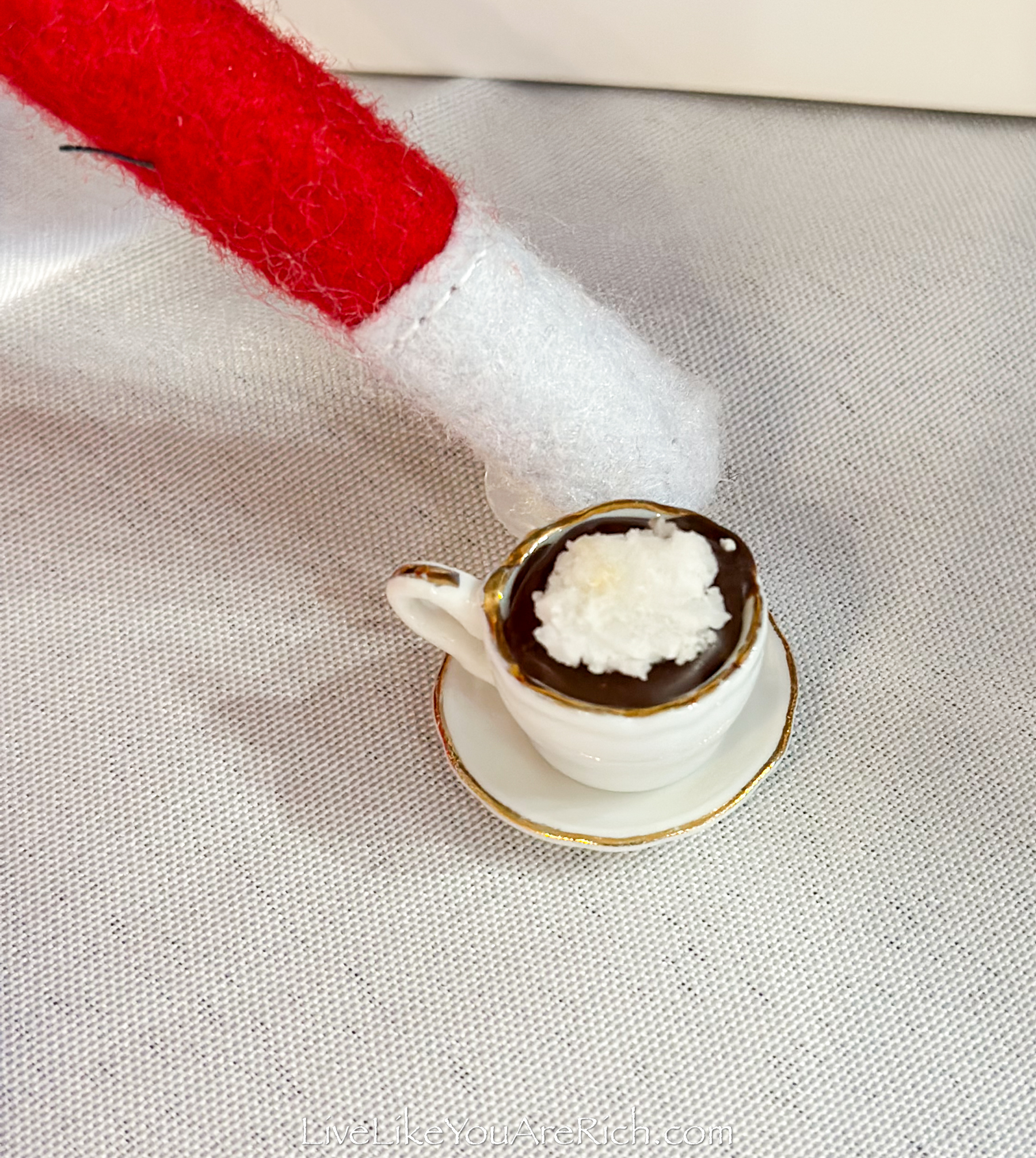 They were sitting on a white tablecloth on our dining room table which was originally set as a Polar Express Kids’ Tablescape a day or two before this Elf on the Shelf: Polar Express scene. 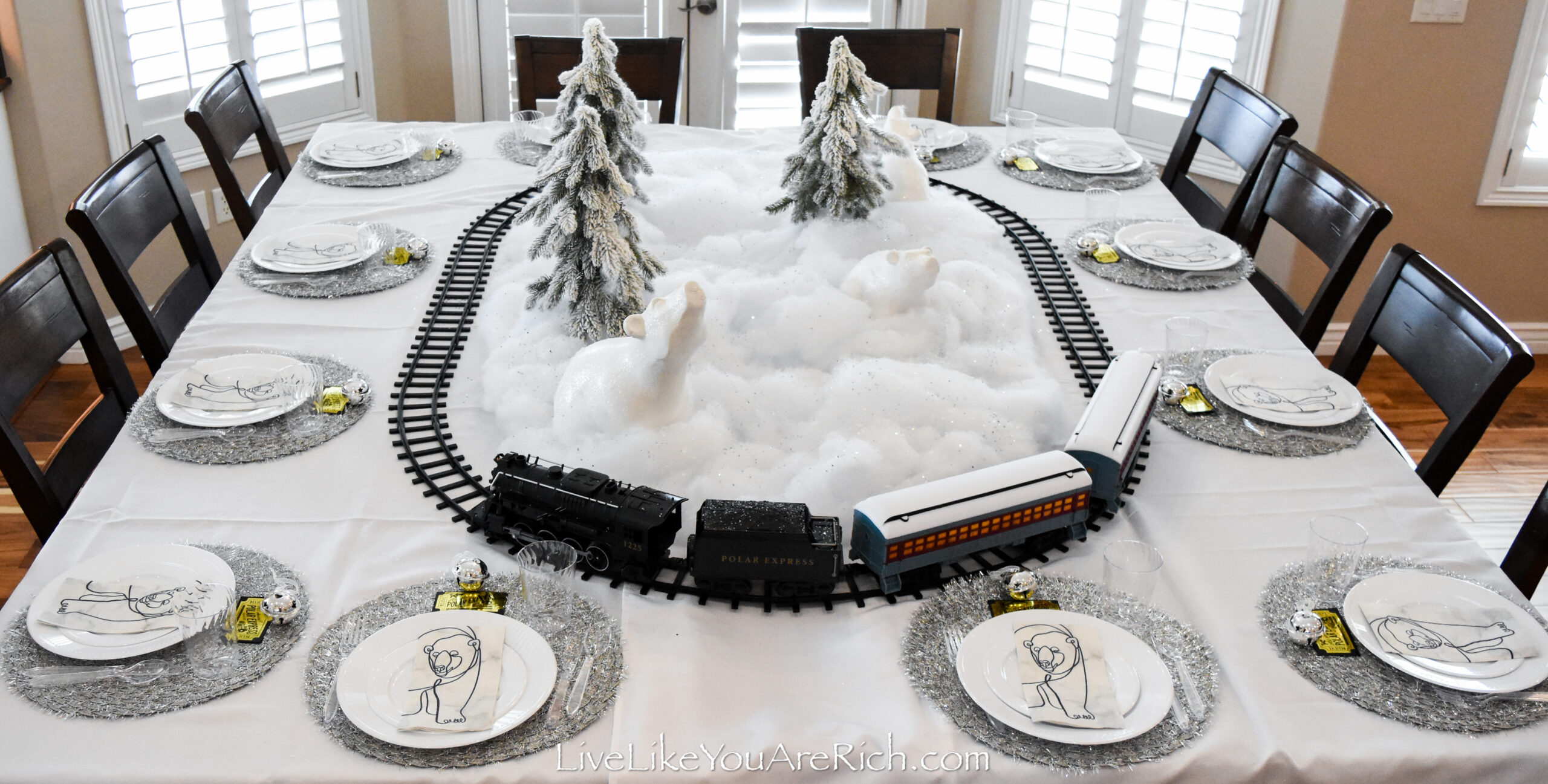 So, Pepper and Winter, our Elf on the Shelf sibling duo, didn’t have to do much to set this scene up. 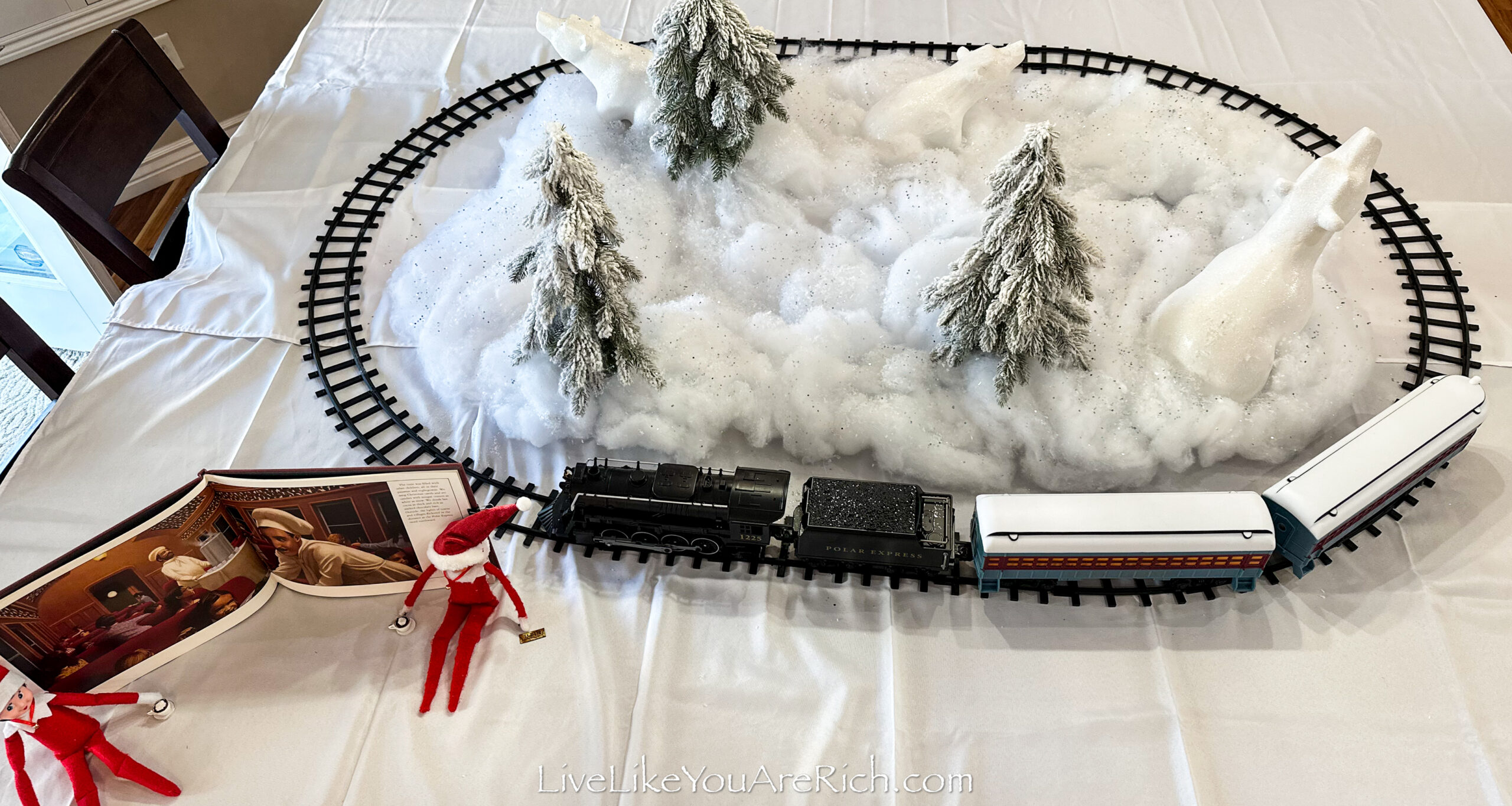 They simply set out The Polar Express book. They had it opened using paper clamps to the following page. 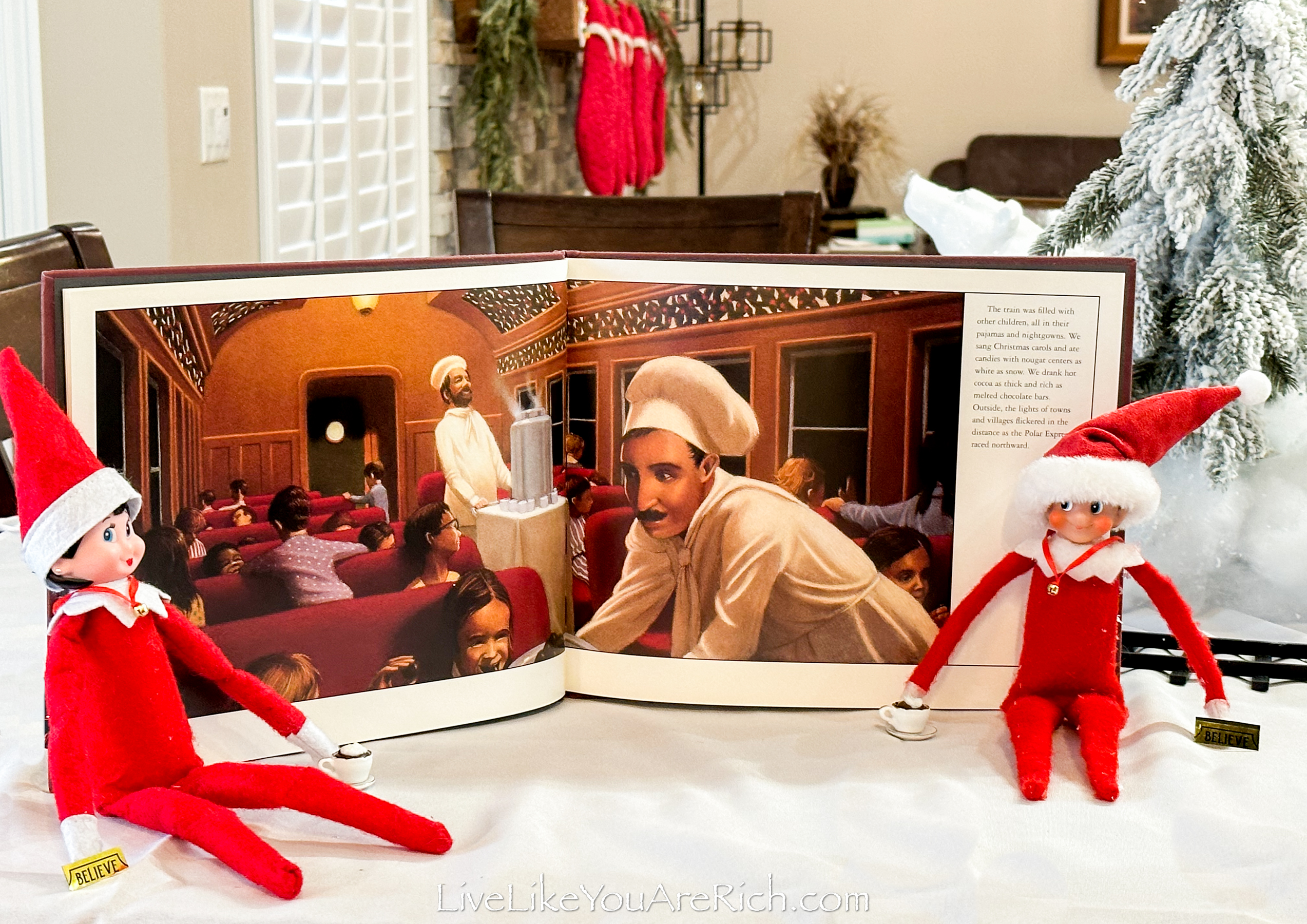 I think it is fitting that they were sitting on a white tablecloth as it matched the tablecloth in the illustration on this page.

The words on this page say,

“The train was filled with other children all in their pajamas and nightgowns. We sang Christmas Carols and ate candies with nougat centers as white as snow. We drank hot cocoa as thick and rich as melted chocolate bars. Outside the lights of towns and villages flickered in the distance as the Polar Express raced northward.”

We were a bit jealous when we saw this scene as there isn’t too much better than eating candies with nougat centers, drinking hot cocoa as rich as melted chocolate, and singing Christmas Carols as you ride the Polar Express northward.

How I put together this Elf on the Shelf: Polar Express scene.

Pepper and Winter sat on this Polar Express tablescape (see the post on how to set it up).

Then they strung a 6mm bell on an ornament-sized (1/4″) red satin ribbon and made bell necklaces. 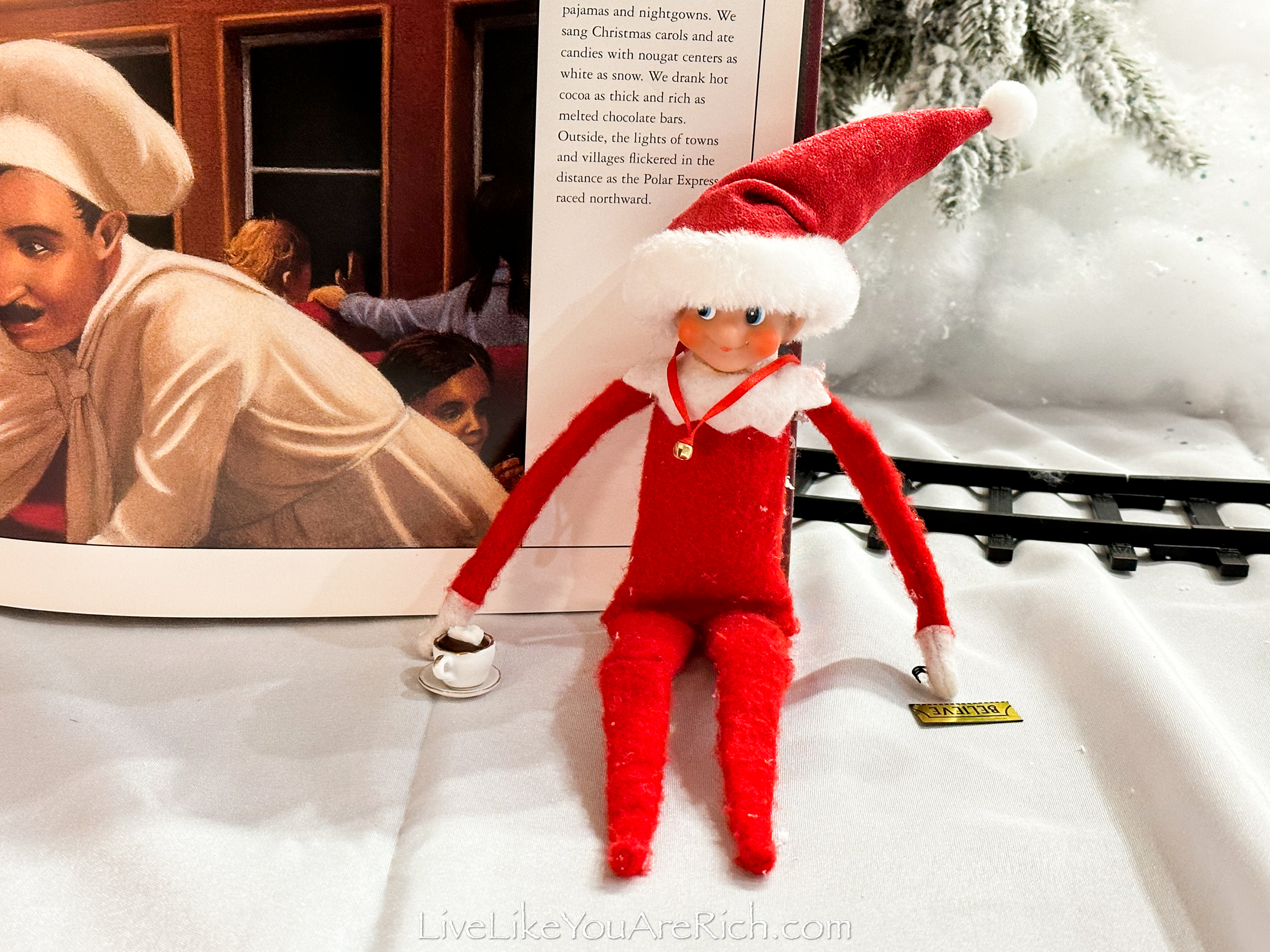 Next, they took the ends of these larger tickets that the kids received at our Polar Express Christmas party and cut them into small tickets. 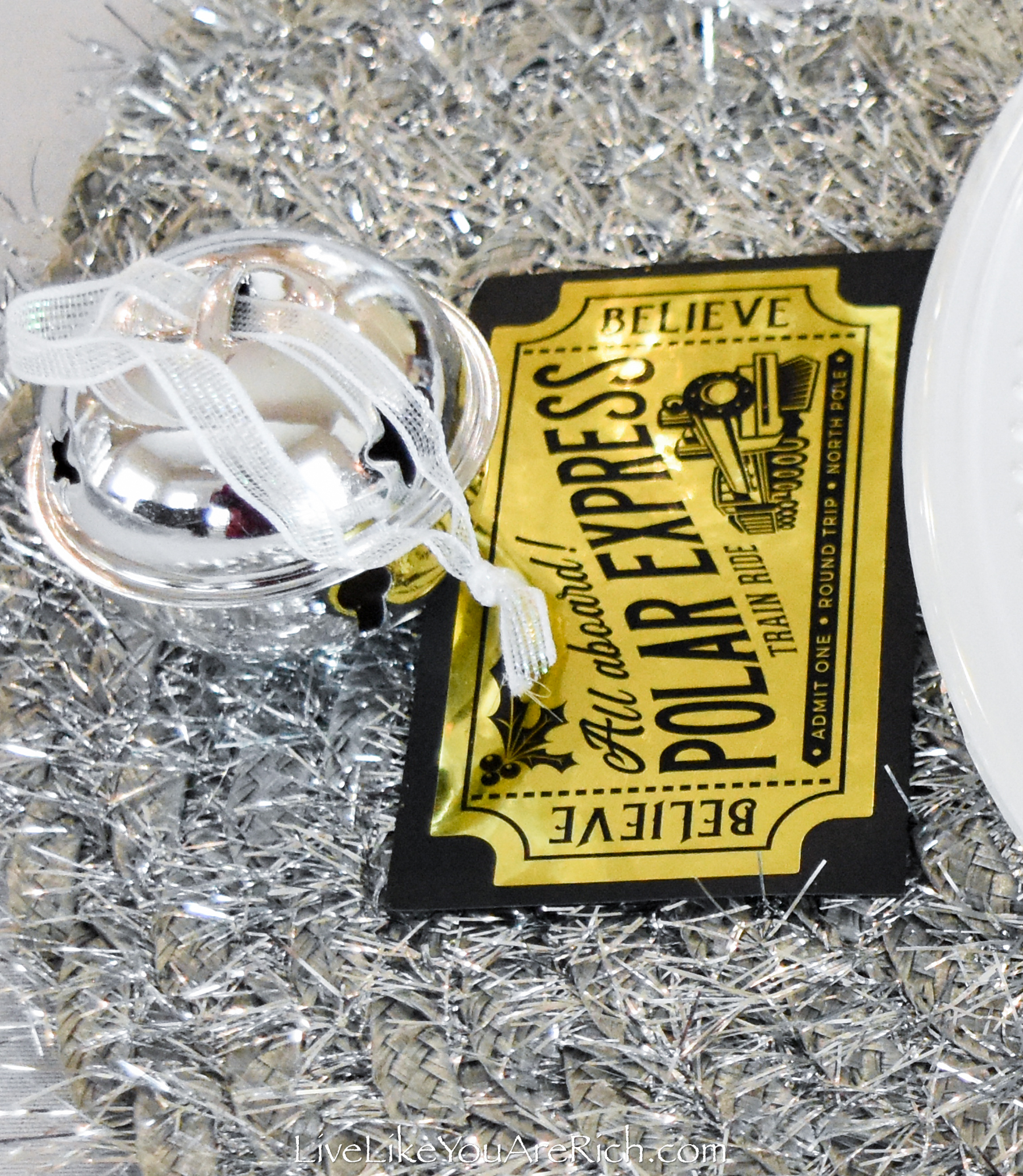 They melted a chocolate bar in the microwave and scooped the melted chocolate it into a tiny porcelain Hümmel tea cup; then they put a dab of white frosting from our gingerbread houses on top to look like whipping cream. 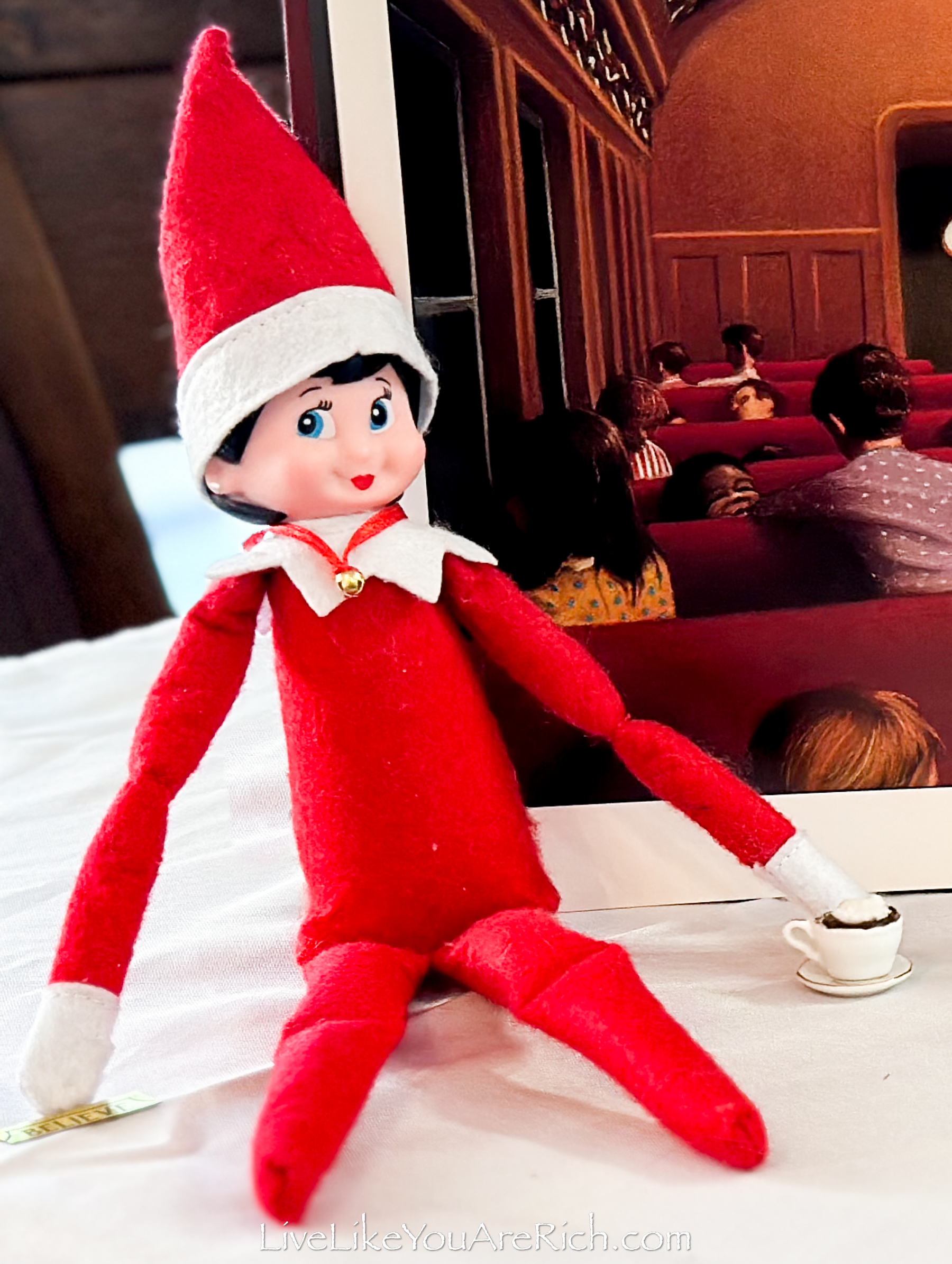 Supply List for this Elf on the Shelf: The Polar Express scene.

M.J.Hümmel 1:12 tea set (for the exact one, try Poshmark, Ebay, Mercari, or other similar sites.) 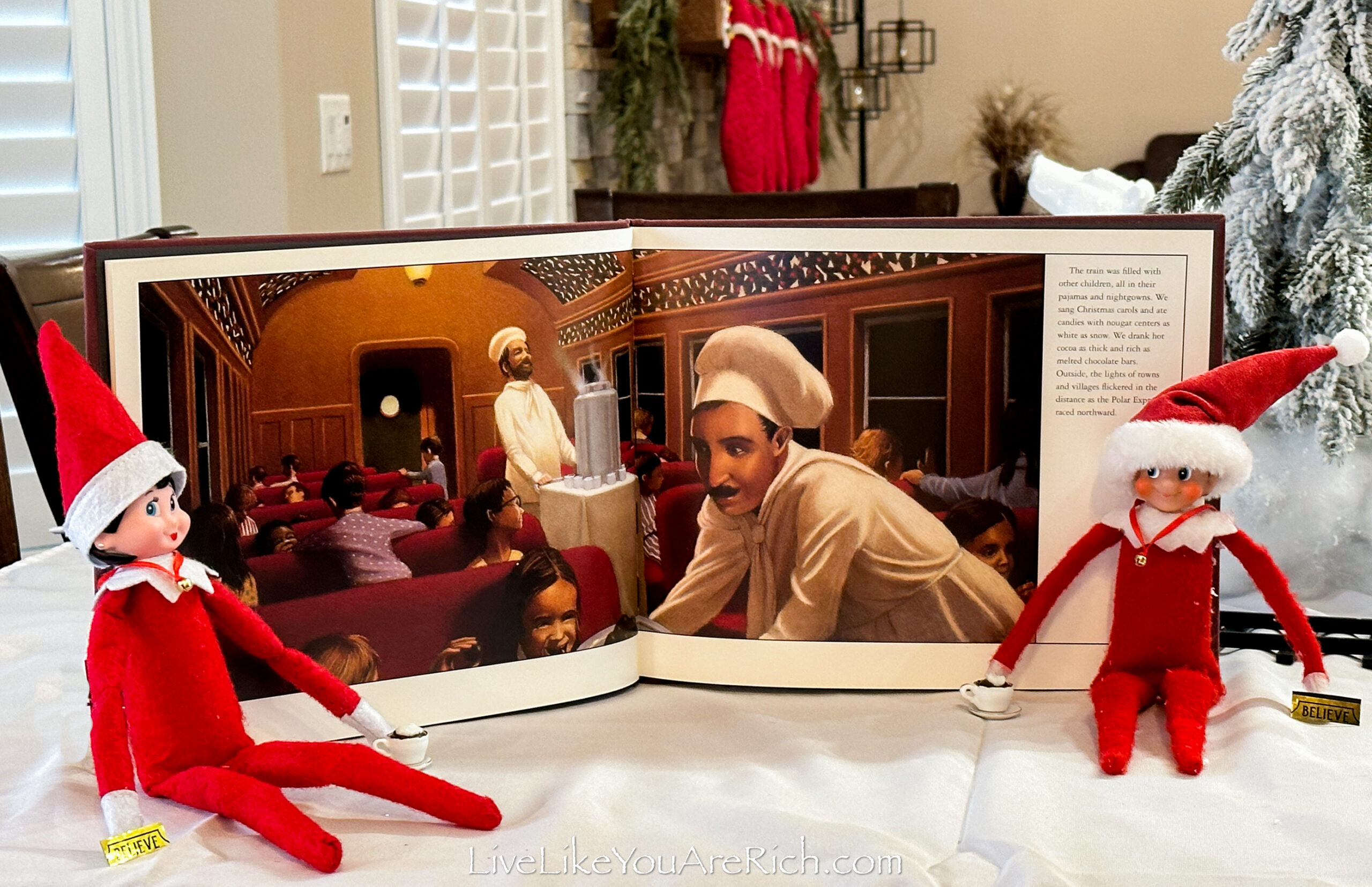 Supply List for the Tablescape portion of this Elf on the Shelf: Polar Express Scene.

For more details about this Elf on the Shelf: The Polar Express scene, check out the video on this post. 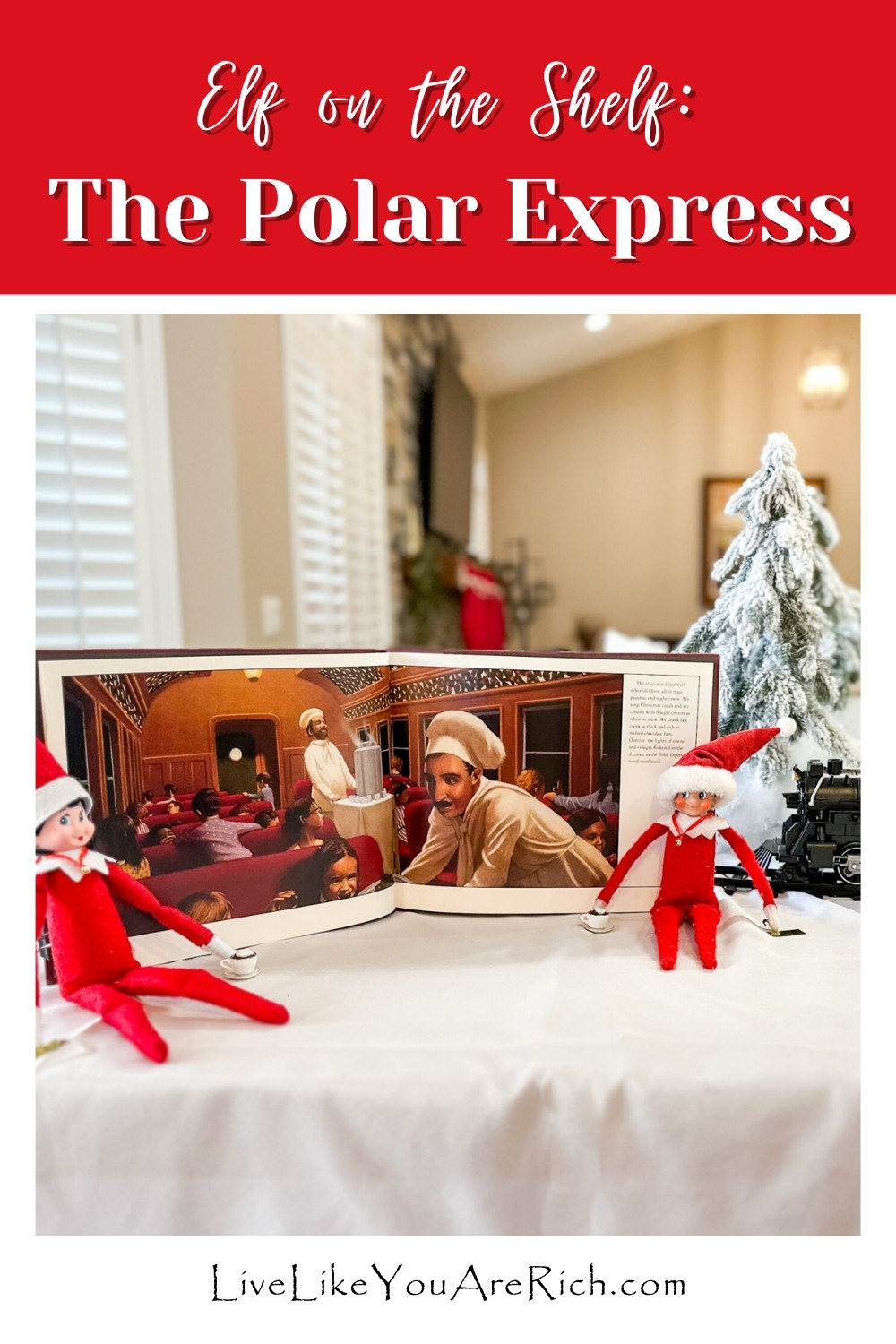 Gift Ideas for The Twelve Days of Christmas Days 10-12

3 Tips to Planning a Stress-Free and Affordable Holiday Season
Previous Post: « Christian Symbols of Christmas—Kids Advent Calendar
Next Post: Elf on the Shelf: A Christmas Carol »